What to Do, What to See Here

Central Dalmatia is full of history and life!

What to Do, What to See Here

Central Dalmatia is full of history, culture and life! Enjoy exploring it..

Duce is a series of small settlements in Poljica, the area between the foot of the Mosor mountainous chain and the sea. It belonged in the past to the famous Poljice Republic ruled by the Grand Duke according to the decrees of the Poljice Statute. Such a heritage has left an indelible imprint on that place which is proud of its preserved examples of popular rural architecture. Today, Duce is consists of two parts: the modern touristic one, located by Adriatic the sea and the ancient, rural one, located in the foot of the Mosor mountain.

Due to its unique position and beautiful sandy beaches with long shallows, the small place Duce represents a natural phenomenon and one of the most important tourist destinations on the entire coast of Central Dalmatia.

Duce is famous for its 4 kilometres long beautiful sandy beach, that makes it perfect destination for families with small children and young people that are looking for fun. Many restaurants and caffe bars and the vicinity of the towns Omis and Split guarantee unforgettable holidays, not just sunbathing and swimming in the crystal clear Adriatic sea. The long and successful tradition of tourism in Duce and the offer of quality accommodation facilities are the guarantees of an unforgettable holidays in Duce. 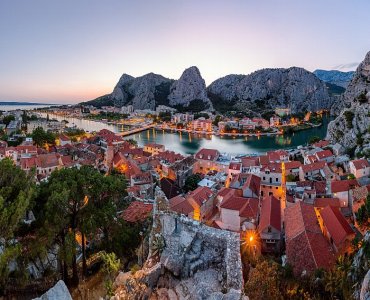 Only 3 kilometers away from Duce you can find the small medieval town of Omis, situated right under a ring of impressive mountain cliffs, at the very place where the river Cetina enters the Adriatic Sea.

It is precisely the river Cetina which, as the so-called pearl of the Adriatic, makes this part of the Croatian coast so unique and incomparably beautiful and by creating a connection between the sea and the continent provides a perfect setting for ecotourism.

The impressive canyon of the river Cetina offers innumerable possibilities of adventure tourism, but also the opportunity to enjoy the peace and quiet of nature in an excellent restaurant right by the river.

VIDEO: Omiš - try it all or just relax

Situated away from the sea, on the other side of the Dinara mountain, Poljica are a rural area that offers escape from the hustle and bustle of the crowded town streets and beaches. But although an oasis of peace today, throughout the history the villages of Poljica were a venue of many significant battles.

From the 13th century onwards, the territory of the today’s Poljica was organized as the so called Republic of Poljica, which has remained a unique phenomenon in Europe due to its at the time quite progressive administrative form and social structure. The medieval Republic of Poljica was, in fact, governed by the people, who elected their leader – the great Prince of Poljica – through a democratic voting process held each year on St. George’s Day. 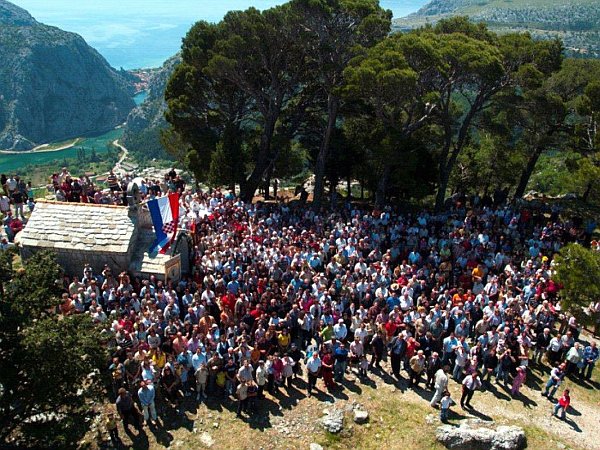 One of the basic legal acts governing the functioning of the Republic of Poljica was the famous Poljica Statute, originally written in the 14th century. This invaluable piece of Croatian legal history regulated in detail all aspects of economic and social life in the Republic of Poljica. Furthermore, the document is also a testament of how much ahead of their time the inhabitants of Poljica were, living, as they did, in one of the few truly democratic societies of the period.

The more than 600 years old Republic was finally abolished in 1807, following Napoleon’s conquest of Dalmatia, but numerous churches, houses and other monuments stand as silent witnesses of its rich history until today (such as the Early Christian Church in Podgrađe (5th century), the Nativity of the Blessed Virgin Mary Church and cemetery in Tugare(13th century), the 13th Roman Villa Rustica (5th century), as well as the famous Poljica Statute and “soparnik” – a delicious traditional dish from Poljica, today included on the official list of Croatian Intangible Cultural Heritage.

Some 20 kilometers away from Duce the ancient, 1700 year old town of Split is situated. Without hiding their pride, the people of Split will tell you that their city is "the most beautiful one in the world and beyond". You better not discuss this with them for well spirited Split will convince you in this as soon as you discover it!

The story of Split is already 17 centuries old, dating to the time the Roman Emperor Diocletian decided to build his Palace right on the peninsula near the great Roman city Salona, where he wanted to spend the last years of his life. During these 1700 years the Palace slowly turned into a city, which to this day lures with its rich tradition, glorious history and beauty of its natural and cultural heritage.

Diocletian Palace and the entire historical core of Split have been on the World Heritage UNESCO list ever since 1979, and not only for the extraordinary preservation of the Palace, but also because the Palace and its city (or the city and its Palace, if you like) continue to live a full life. Also very unusual to find in a city the size of Split are the numerous beaches with extraordinarily clean sea, from the well known Bačvice to the stone secluded oases’ all around Marjan. After all that’s said are you at all surprised that citizens of Split have a saying "There is no place like Split”?

Gastronomy, cyclotourism and exquisite wine offer combined with virgin landscapes and clean air – these are the features of Dalmatian Zagora - Dalmatian hinterland. This area used be known as rocky, karst region with characteristic highlander touch, but it has become prominent as one of attractive attributes of Central Dalmatia.

This rough diamante of Central Dalmatia delights with its cultural heritage, natural beauties of rivers, caves and mountains, with irresistible topography of pure karst landscapes. This destination is famous not even in Croatia, but it hides immeasurable potential for this part of Dalmatia that, with the help of Zagora, can enrich its luxurious offer with contents that are not dependant of the sea and the sun or seasonal tourism. 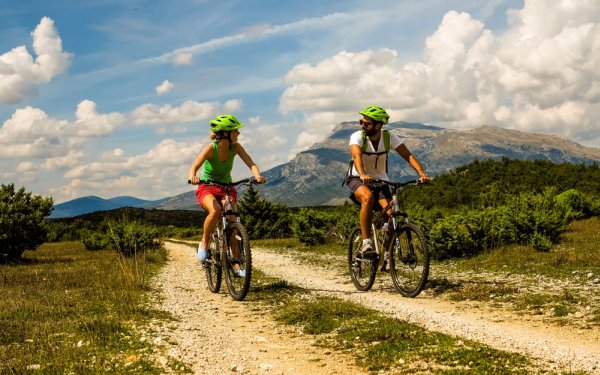 This is the most stunning coastline in Europe: a mix of limpid bays, craggy bluffs, hidden coves and beaches, vineyards, olive groves, and forests of cypress and pine. Remarkably well preserved ancient towns hold vivid examples of Greek, Roman, Venetian, and Slavic architecture.

The sailing and yachting scene here rivals any other, with hundreds of ports and dozens of marinas and countless natural inlets scattered across a thousand islands. Dalmatian cuisine—consisting of superb fish, shrimp, octopus, and oysters, along with increasingly renowned wines—compares favorably to Italian cooking, and borrows heavily from it: here risotto becomes rizot and prosciutto becomes the delectable prsut. But Dalmatian food is earthier and rougher than Italian, blending hints of Turkish (kebab-style raznjici, or meat skewers), and Slavic (sour dumplings). It's also exceptionally affordable.

Finally, an exuberant nightlife dominates on the larger islands of Hvar and Brac, where revelers keep the party going until sunrise. There's a palpable urgency to the proceedings. This may be the most widespread consequence of the war: everyone—Croatians themselves, as well as their blissed-out guests—seems to be making up for lost time. For now, it's Croatia's moment; who knows how long it will last? 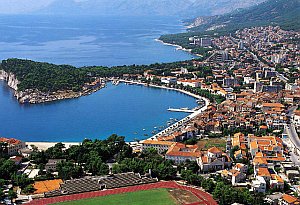 Makarska Riviera is a part of Dalmatian coast of Adriatic, about 60 kilometers long and only several kilometers wide, squeezed under towering mountain Biokovo. Sunny climate and long pebbly beaches make this region a popular tourist destination. A string of settlements along the coast from the border with the Omis Riviera on the northwest to the Neretva delta on the southeast.

Tourism in Makarska began long ago, even before the construction of the hotel Osejava in 1914. the largest city square is located in the city center, near the waterfront - the square of Andrija Kačić Miošić, where numerous cultural events take place. In Makarska, one can find many hotels, taverns, pub, pizzerias, coffee bars, pastry shops and everything else needed for a peaceful and carefree holiday in the sun-bathed shores of the Mediterranean. 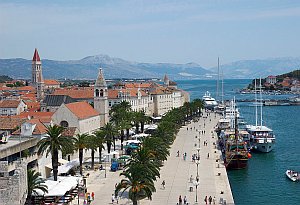 Trogir is a town-museum in the very meaning of the word. Lovers of cultural and historical monuments, art, original architecture and nice alleys are given the opportunity in Trogir to learn about the manifold and complex heritage - from the Romanesque yard to the modern interiors. The unique historical core, Radovan's portal, the art collections which have been arousing excitement among visitors and travellers for centuries offer a tourist beauty, personified in the relief of Kairos as an appropriate souvenir. 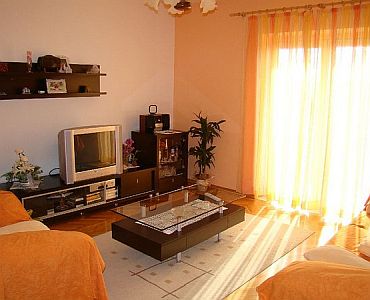 A superb tourist oasis Duce stretches along the coast between the towns of Omis and Dugi Rat. It boasts of breathtaking sandy beaches 4 km long, encircled by rich Mediterranean vegetation.